The US dollar came under renewed pressure in May as the euro to dollar (EUR / USD) exchange rate rose to a 4-month high above 1.2250 before a limited correction was made to the dollar index was also at its lowest level since the beginning of January.

There are significant differences in forecasts as dollar bears expect a cautious stance from the Fed to undermine the US currency as higher yields undermine real yields.

ING sums up the bearish dollar argument; “Given that Fed officials are pointing out the temporary nature of the spike in inflation, the market hardly needs to price in an imminent and meaningful normalization of Fed policy. Coupled with the recovering global economy and signs of a synchronized growth outlook, this is not an environment in which the USD would thrive, especially in the face of extremely negative real interest rates. “

Other banks expect the Federal Reserve to react more quickly and trigger a recovery in the dollar over the next few months. In this context, a tightening of the Fed could also support the dollar if global equities come under pressure.

The relatively even distribution is illustrated by the consensus forecasts that after 12 months there is no change at 1.22.

May Jobs setback, but US economy continues to fluctuate

The US economy posted solid growth in the first quarter, with retail sales spike in March, while there were very strong corporate polls with the US index for the PMI services sector hitting a new record high in May.

Expectations of strong US growth boosted the US dollar in the first quarter as bond yields rose sharply.

However, the portrayal of a US surge has been questioned after a weaker than expected job report in early May. Bond yields have also fallen, which has hurt support for the currency.

RBC Capital Markets expects the US outperformance to continue and support the dollar. “The widely anticipated catch-up in growth expectations outside of the US is still failing, and the reality is that ongoing upgrades to the US continue to widen the gap in favor of the US.”

The Federal Reserve’s guidelines hold the key to dollar direction

The US Federal Reserve cut interest rates to almost zero in the coronavirus crisis last March and kept the Fed Fund’s key interest rate in a range of 0.00 to 0.25%.

The Fed continues to buy $ 80 billion in government bonds and $ 40 billion in mortgage-backed securities every month.

ING commented; “A leisurely Fed at a time of greater confidence in the global recovery suggests the dollar could fall another 5% across the board.”

“Only when the Fed is ready to do something about it – perhaps in Jackson Hole in August – will the dollar find support.”

Nordea expects a similar timing; “We think a tapered reference to the Jackson Hole conference or the September Fed meeting is quite likely.

The bank adds; “Maybe we’ll even have a hot summer, a summer full of cone talk?” The bank believes the potential for rhetoric will support net dollar markets if markets fear further selling.

Bank of America expects the dollar to strengthen in the medium term. “We are still aiming for a slight strengthening of the USD this year and forecast EUR / USD of 1.15 by the end of the year. Our USD views largely reflect our expectations of outperformance in US growth – fueled by the sizeable US fiscal stimulus, recovering consumer and rapid vaccination rate – and the eventual normalization of Fed policy. “

Goldman Sachs Notes How Important Fed Policy Will Be; “Markets are rightly focused on the Fed’s risks – an unexpected hawkish pivot from the central bank is arguably the greatest risk to our bearish dollar thesis – but we see little reason to believe that the outlook for US policy will change have changed.

In this context, Goldman expects EUR / USD to strengthen further.

Westpac also expects the dollar to weaken further; “A collapse of DXY in 2021 just seems like a matter of time.”

Inflation has risen sharply, with the annual rate rising to 4.3% in April. This is the highest value since 2008 with an underlying rate of 2.3%.

The base effects have had important ramifications as prices have fallen over the past year. There was also strong upward pressure on raw material prices and costs in the US and the global economy.

The latest US corporate surveys have seen record highs in price indices paid and strong upward pressure on prices received.

ING Notes How Central Bank Reactions Affect Exchange Rates; “What the central banks are doing on the other hand, is happening in the foreign exchange markets around the world. Those who use traditional game books will be rewarded with stronger currencies. Those like the Fed who are experimenting with sharply negative real rates are seeing their currencies coming under pressure. “

The main argument made by the Federal Reserve is that these inflationary pressures are temporary and that inflation rates will fall again over the next year.

As part of the new Fed policy target, the central bank is aiming for an average inflation rate of 2% and wants to push the interest rate above 2% in the short term.

In this context, the Fed is aiming for employment maximization and an easy monetary policy. The latest forecasts by the Fed continue to suggest that interest rates will not increase until 2024.

If policy changes, however, expect a sharp correction and recovery in the dollar.

Danske Bank seeks higher US yields. “We expect the US recovery to remain strong, manufacturing PMIs to be lower and US real yields likely to rise in the second half of the year.”

US deficits also in the spotlight

The US will continue to run a sizeable budget deficit, and the trade deficit has also hit record highs given strong import demand.

While the strong fiscal stimulus will boost the US growth rate, it will also expose the dollar to underlying vulnerability.

The significant current account and budget deficits will leave the dollar vulnerable to selling pressures.

UBS listed; “A major side effect of higher domestic spending on goods is a growing current account deficit, which is lowering the bar on US investor outflows on the dollar. These drains have plenty of room to improve as the global picture improves. “

In contrast, the euro zone has a large current account surplus, and this surplus provides important net euro protection, even if the overall yield structure is unattractive for the currency.

Eurozone on course for a strong recovery

After a very poor performance in the first quarter, the outlook for the eurozone has improved significantly.

Business confidence has improved significantly, with the German IFO index showing its strongest value in over two years.

The ECB has kept policy rates at zero and has also increased the rate of bond purchases for the second quarter, with the bank trying to cap yields.

The bank will want to maintain favorable financing terms to support the recovery.

MUFG notes cautious rhetoric by the ECB; “We no longer assume that the ECB will expressly commit to a slower pace of QE purchases at the June meeting, despite the improving growth prospects.”

The bank adds; “The recent reluctant shift in the rhetoric of ECB policy and the contrasting shift in Fed rhetoric by the hawks is a bearish trend for the euro.”

In this context, there will also be concerns about the impact of the strength of the euro, especially as it would undermine the competitiveness of exports.

A stronger Chinese yuan would be important to address these concerns.

The ECB is also conducting a medium-term review of inflation. There is speculation that the bank will decide to adjust the target and aim for a medium-term average inflation rate compared to the current target of a rate close to but below 2%.

A shift in inflation by the ECB would undermine the euro in the long term. 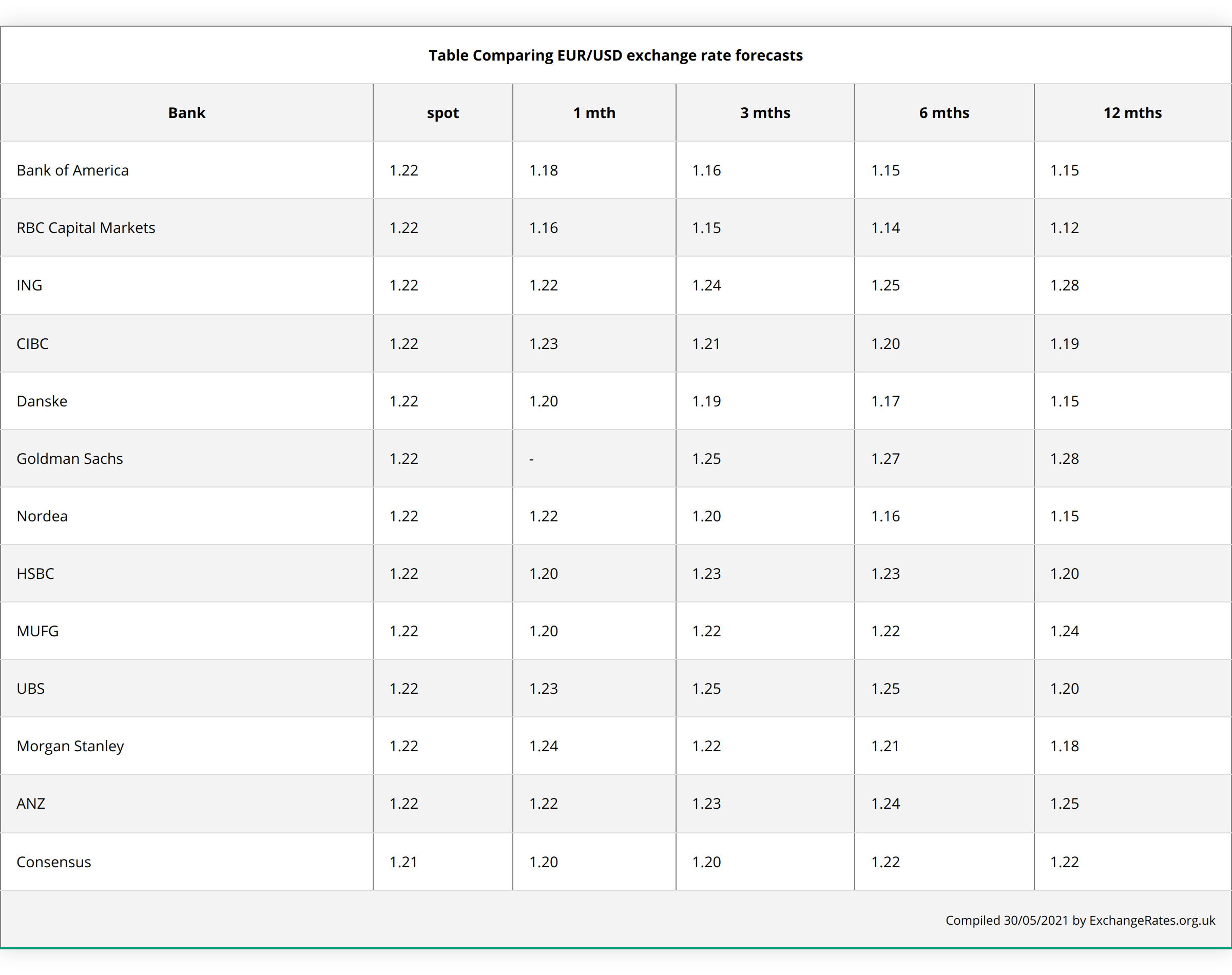